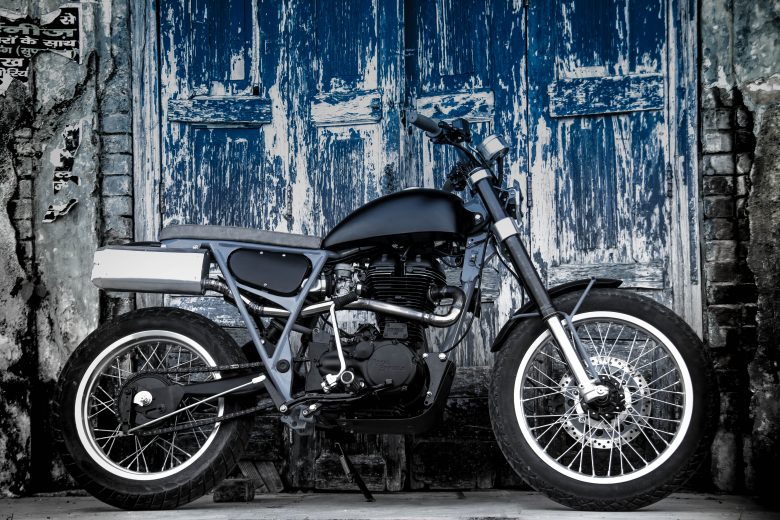 Bullet Scrambler is a modern scrambler which still retains the classic British charm, built to hit the trails.

Arjun Raina is a person with many talents – he’s a ex-racer, rally privateer, a biker and a bike customizer. But its his avatar of Moto Exotica founder that we’re more interested in. When it comes to bike customization, the Dehradun lad doesn’t believe in simply enhancing the aesthetic appeal of the bikes, he prefers making his machines technologically superior as well.

When it comes to customizing motorcycles, Arjun – who’s also run as a privateer team at Raid de Himalaya – doesn’t stick to a single style, say, an enduro or a tracker; he does it all. “One thing about us that has remained constant with time is the variety ! from slick cafe racers to bare bone scramblers to the enduro KTMs,” he says.

“This is the first Royal Enfield that gets our special treatment, typically in the Moto Exotica fashion,” says the Dehradun-based designer.

Let’s take a look under the hood of this hard-hitting Royal Enfield.

“For quite some time we have been planning to work on RE, what better than to start with a classic scrambler.”

It’s an almost fully-customized chassis to deal with the rugged requirements. 80% of the chassis was rebuilt, the bike was put on a strict diet and metal chunks were replaced with carbon fiber. Overall weight of the bike went down by as much as 30 kilos compared to the stock Royal Field.

The headlight custom machined using five-axis CNC machine with LED bar insert. The tail light and the indicators are hidden underneath the seat.

Keeping in tune with rest of the bike, the seat pan is also made up of carbon fiber which is then covered up with leather that was sourced internationally.

Telescopic single function WP forks give it as much as 10 inch of travel for when you decide to take your bike off-roading.

Design goals were fixated upon building a modern scrambler and yet retain the charms of a classic British bike.

Here what you have is a practical bike that doubles up as a true Scrambler maybe even a Tourer.

While they’ve re-purposed the switches and some electronics, the rest of the machine was painstakingly built using mild steel, aluminium, stainless steel and carbon fiber. It took more than 3 months for the Moto Exotica Team to complete the build and the hard work is evident in the final output. 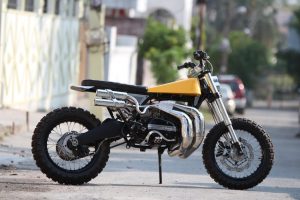