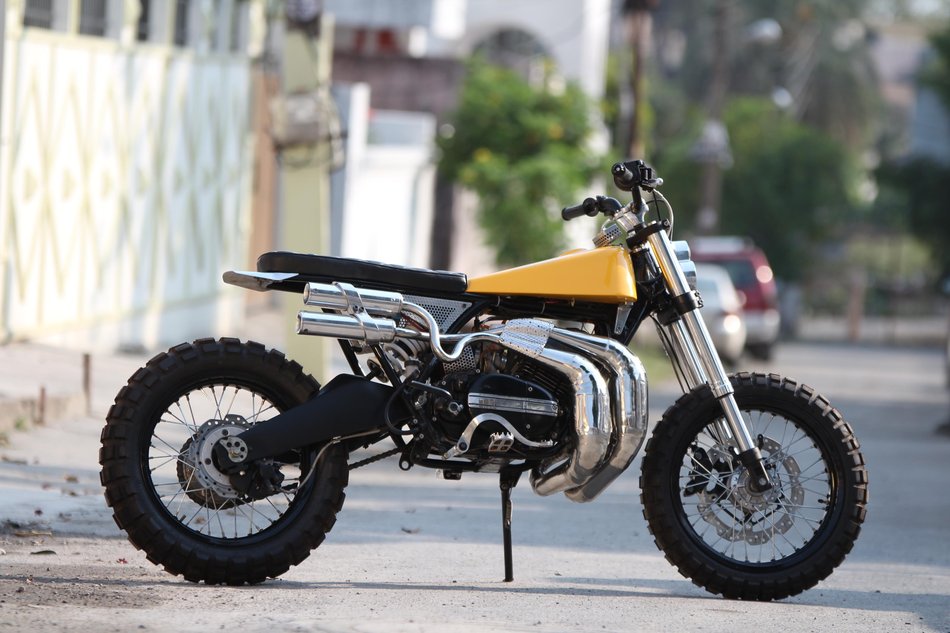 Moto Exotica’s Eight looks like a love child of Yamaha RD350 and a cliff. But faster.

In a country where 125cc swarm the showrooms and streets like honeycomb during breeding season, we seldom come across motorcycles that stand out from this timid flock. But creating a one-off masterpiece is more difficult than making a teenage girl understand why Justin Beiber is not the master of the universe. However, some bike builders have been carving out pieces of art so that the rest of human species can gawk at their creations. One such piece of work is ‘Eight’ by Moto Exotica.

Moto Exotica is based on the legendary Yamaha RD350. We caught up with Eight’s creator and Moto Exotica’s founder Arjun Raina to know more.

Story behind the name: This is Arjun’s eight bike

Chassis: The engine bay is from RD350. Rest of it is custom tailored to suit the modifications.

Top speed: 200 kmph. On a Scrambler so top speed is not as important as the mid-range. Arjun has a similar configuration on a Café Racer and it does 184 kmph. This is lighter and Arjun expects it to do 200 kmph.

Suspension: Front-end’s from a KTM 200. It’s re-valved and has been made a little softer for better ride quality on gravel and dirt. Rear-suspension is also from KTM 200. But the angle is slightly changed in order to enable a little more travel while off-roading.

Swingarm: It’s 100% custom-made because the bike required it to be a little longer. This is 6 inches longer than the normal RD350 because once you start increasing the power, the front-end lifts and you start doing wheelies; to compensate, you drop the gas and reduce the power. So, in order to keep both the wheels on the tarmac, they lengthened the bike by adding this very strong and long swingarm.

So, if you make the swingarm slightly longer, you can even do the hill climb without tweaking the engine.

Seat and Tank: They are shaped in such a way that you can glide from seat to tank easily to give better traction to the front end when the need arise. Especially while taking the tight corners.

Brakes: They’re upgraded. At the front, there is a 4-pot caliper with rotor from a CBR 250 which is mod-ed and reshaped. Ditto for the rear wheel. Bibram is sister-concern of Brembo in India, for cheaper manufacturing.

Exhaust: There are two exhaust pipes and each of them is hand built from 45 different sections.

“This is not mild-steel, this is the stainless steel and it’s even more difficult to work with. We get limited by the processes that we are used to work with it. This is TIG weld and there is only a certain way in which you can finish them. The upside is that this is much stronger. Some people say that performance wise, stainless steel is poor; but whatever we’ve done so far, in our experience, we’ve always had superior performance with stainless steel,” explains Raina.

Why is the chain a bit loose?

To allow the suspension to travel freely. Over time, we’re planning to add the roller chain adjusters similar to how most of the off-road bikes have but that will happen at a later stage.

Did you purposely finish the exhaust this way so that all the sections of the pipe are visible?

So, how did you get into bike customizing?

It’s been a long journey. When I was in class 10, we had little Shoguns and we always wanted to go faster; so, I decided to mod my bike without knowing if it was right or wrong. Then somewhere along the way, I started getting it right.

This all started somewhere around in year 2000, as a kid. Then I pursued my education and did my Mechanical Engineering. Then I did Masters in Machine Designing. I worked for few big companies then (I won’t name then). But then I realized that I don’t want to work for someone else all my life. I wish to do something on my own. So I started designing bikes under my own name.

It seems, Yamaha RD 350 has always been your focus when it comes to bike building/modifying?

It’s not like I’m not doing other motorcycles. It’s just that, because the engine is so compact and versatile, and given the fact that how easy it is to make the changes; I’ll always keep this as a personal favourite. It pulls out close to 65 BHPs and the bike weighs less than 100 kg. From power-to-weight ratio perspective, that almost puts it in the superbike category.

Arjun is keeping his lips sealed about his next bike but he’s tempted us by saying that “It’ll be a 500cc flat racer, and it’ll set a benchmark in the world of custom bike building in India.”

We’re surely looking forward to that one.

Disclaimer: The article was first published by the author for RedBull.com 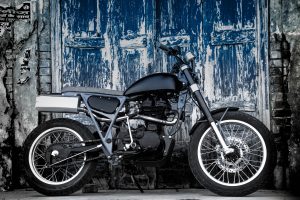